Now there was a man in Jerusalem whose name was Simeon; this man was righteous and devout, looking forward to the consolation of Israel, and the Holy Spirit rested on him. It had been revealed to him by the Holy Spirit that he would not see death before he had seen the Lord’s Messiah.

Guided by the Spirit, Simeon came into the temple; and when the parents brought in the child Jesus, to do for him what was customary under the law, Simeon took him in his arms and praised God, saying, “Master, now you are dismissing your servant in peace, according to your word; for my eyes have seen your salvation, which you have prepared in the presence of all peoples, a light for revelation to the Gentiles and for glory to your people Israel.”

And the child’s father and mother were amazed at what was being said about him. Then Simeon blessed them and said to his mother Mary, “This child is destined for the falling and the rising of many in Israel, and to be a sign that will be opposed so that the inner thoughts of many will be revealed–and a sword will pierce your own soul too.”

Simeon opened his eyes and all he saw was darkness. He woke up every morning at the same time for as long as he could remember. He unfolded his blanket away from his frail body and slowly made his way out of bed. Every morning, it took him longer to get to his feet than the one before. He wondered how many more mornings he had in left him. Simeon was now an old man who long ago made peace with God and with death. He had lived a long and full life, and now he was ready for it to come to an end.

Simeon was a patient man; faithful too. God’s Spirit had come to him and told him that he would not see death until he had seen the Messiah. God had told Simeon that the one who would come to redeem Israel was on the way. God would send a savior to the world who would deliver the people from their hardship and comfort their restlessness.

But God had told him this a while ago. Simeon had been waiting years.

Simeon wondered, just like he did every day, whether today would be the day. God’s window of opportunity was, frankly, getting smaller. Simeon was somewhere in his eighties, and his body never let him forget that. He slipped on his robes and stepped outside.  It was morning in Jerusalem, but the sun’s rays had not yet stretched over the hills.

Simeon breathed in deeply. Mornings were his favorite part of the day. He wrapped the scarf around his head just a little tighter, and he began his daily journey to the Temple. There was a chill in the air that Simeon loved. The cool air invigorated him and helped him forget his own weariness—this day-after-day vigilance. God had blessed Simeon with a great promise, one he was humbled to receive, but, to be honest, waiting this long for God to deliver on this promise was stressful for him. Plus, he wondered how he would know what to look for. Simeon had no idea what a messiah looked like. He had a hard time trusting that one day he would just stumble upon a messiah unwittingly. How would this unfold? What if he missed it? What if he already had?

Simeon had decided that God uses us in ways that surpass even our own understanding, but still God needs us to pay attention. “Simeon” was an old name that means “he who hears”. He was a vigilant man. His eyes and ears were wide open, so that he was better able to see and hear what God was doing right in front of him.

Simeon listened closely, he looked around.

A reflection by Pat Ryan. 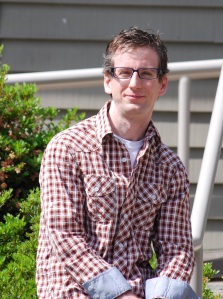 Pat is a candidate for ministry in the PC(USA) and is ready for a call. He tweets at @writingpat. You can see where Pat blogs at his about.me page.

And you will say in that day: Give thanks to the Lord, call on God’s name; make known God’s deeds among the nations; proclaim that God’s name is exalted. — Isaiah 12:4

Anna spent every day of her life in the Temple. She knew who came and who went, and her eyes were peeled. Along with Simeon, she was looking for the fulfillment of God’s promises. Anna spent her days speaking, sometimes shouting at the top of her lungs, that God had not abandoned the people. But as Anna looked around, she mourned the direction that things were moving in.

The Caesars and the Herods ruled Jerusalem with an iron fist. Rome occupied the Holy city of Jerusalem. Even the King of the Jews, Herod, did everything Caesar wanted him to do. There were no princes, or kings, or rulers who had any concern for the well-being of the common people, and as long these cruel leaders were in control, there was no consolation for Israel and no redemption for Jerusalem.

Anna saw what was happening in the Temple, too. The signs of power and greed that were overtaking the region had begun to overtake the Temple itself. Money changers overcrowded the corridors of the Temple, each of them profiting off of every transaction. Exploiting poor peasants like Mary and Joseph was an everyday practice for the Temple money changers. Merchants were selling animals for sacrifice at unfair prices.

Anna spoke against this type of sin. This was God’s Temple and God was never interested in these kinds of riches. Anna was concerned that wealth was becoming the peoples’ new salvation and greed their new God.  But Anna knew that real salvation never involved collecting more and more. Salvation was about how God’s love frees us to give more and more of ourselves to one another.

Anna hoped for a new type of power, one that changed people’s hearts—one that brought princes to their knees and made the rulers of the earth into nothing. The only kind of power mighty enough to bring down princes, kings, and the occupying Roman authorities would have to come from God. What Anna hoped for was a Messiah.

The Messiah would be someone who would come from among the people and speak for the people, who would give them a voice, and a new way to see how God works among God’s people. The Messiah, Anna hoped, would usher in a new kingdom.  One stronger and more meaningful than any that had ever existed before.  Not one that exploited the people, but one that raised them up and freed them.

Anna waited in the temple for the one who would come to redeem us all.

Anna listened closely, she looked around. The promises of God were about to unfold before her.

A reflection by Pat Ryan.

Pat is a candidate for ministry in the PC(USA) and is ready for a call. He tweets at @writingpat. You can see where Pat blogs at his about.me page.